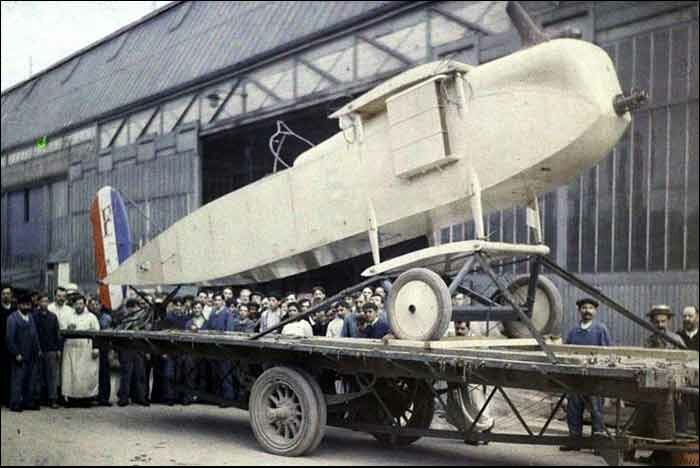 Prototype. The picture was taken outside the Farman aircraft factory in France. The airplane is of an unknown type. Some specialists doubt whether this plane ever advanced much beyond this prototype stage.

The trademark 'F' on the tail, as well as the shape of the rudder, indicate that it's a true Farman. The clear doped linen finish suggests that the picture was taken no later than mid 1917. The observer's gun mounting (if that's what it is) looks to pre-date the 1918 standard Scarff ring.

The Farman company designed other two-seaters, such as the F.30 and F.31, but these were fitted with a Salmson radial engine and a Liberty in-line, respectively - the engine in the photo doesn't look like either of these powerplants. However, there are definite similarities between the nose of a Farman 31 and the nose of this aircraft. On the other hand: both the F.30 and F.31 had fixed vertical fins, and not just a rudder on its own like the machine in this photo. 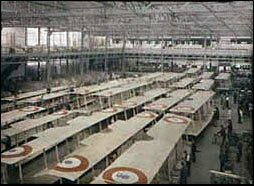 Picture on the right shows the inside of the Farman factory. Because of the shortage of men (many served in the army) most factory workers were women.

Born to British parents, the brothers Henri and Maurice Farman both became aeroplane designers. In 1912 the brothers merged their interests in the Farman works at Boulogne-sur-Seine. Their characteristic pusher biplane types were extensively used for artillery observation and reconnaissance in World War I. They were flewn by the French, the Belgians, the Australians and the Russians.

Goliath. In 1917 the Farman brothers introduced the Goliath, the first long-distance passenger plane, which from 1919 made regular flights between Paris and London, greatly stimulating commercial aviation in France and the rest of Europe.

We are indebted to Gareth, Adrian, R. Pope and Vb136 who, on the , supplied information about the mystery aeroplane on the picture above.