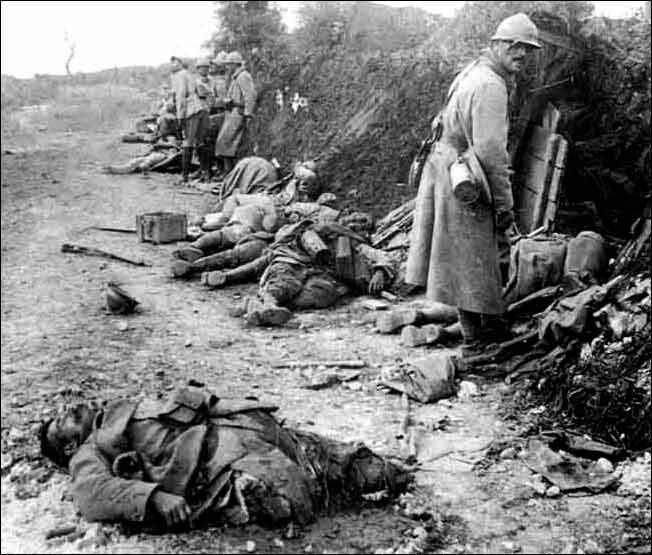 On May 7, 1917 a French army photographer made a picture of a horrible scene along a railway, somewhere in Northern France. The famous French painter Jean Despujols, who as a soldier happened to be there, made a sketch of the same situation.

On May 7, 1917 the German pilot Lothar von Richthofen gunned down Albert Ball, beloved English ace, who died when his plane stumbled down. On that same day the French Marshall Joffre, visiting the United States, bowed his head to Lincoln's tomb in Springfield, Ill. On that day Canadian poet Bernard Trotter, from Toronto, was killed by a shell, also somewhere in Northern France. In the last letter to his folks soldier Trotter had written that he was "listening with a very personal interest to the whistle and bang of the shells". Also on May 7, 1917, the African-American Eugene Bullard became the world's first black fighter pilot (in the French Aéronautique Militaire). And in the afternoon of that same day German planes raided Northeast-London.

Yes, I agree, nothing unusual, just an ordinary warday in May - but the image above never leaves me. When I think of war I don't see heroes with medals, but this dead soldier without legs - RR.