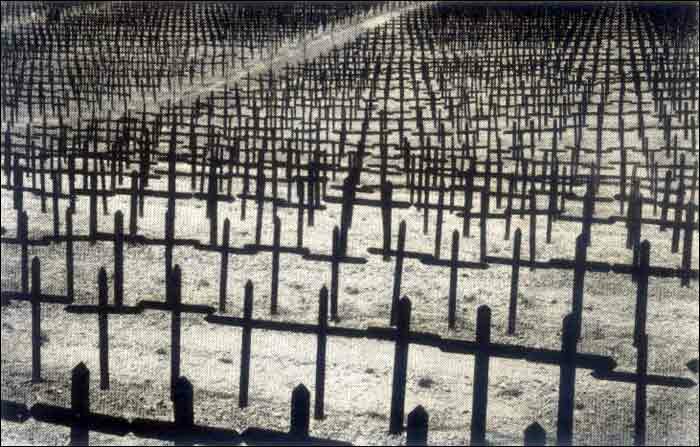 German war cemetery in the village of Saint Laurent-Blangy, north-east of the city of Arras. 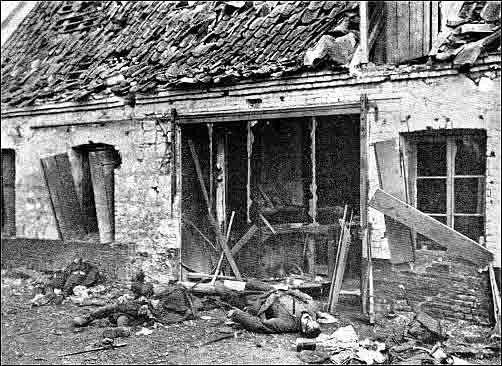 The little village of St. Laurent-Blangy, in Northern France, saw heavy fighting in the years 1914 and 1915. The greater part of the village became frontline; the picture on the right shows a street after shellfire.

In 1917 the war came back to the village, with the Battle of Arras, and it came again in 1918, with the German spring offensive  and the cemeteries filled up, on both sides of the front.

A famous English poet died here: Isaac Rosenberg, who wrote Break of Day in the Trenches, was killed on patrol on April 1, 1918. He is buried in the Bailleul Road East Cemetery in St. Laurent-Blangy.

The Germans paid a high price in this area. Revealing is that many of the buried here have no known names. The German picture above shows a German war cemetery near Saint Laurent-Blangy. The picture was taken during the war.

The German cemetery is still there, although it looks quite different now. Nearly 32,000 German soldiers are buried here: 7,022 in graves, and 21,892 in mass graves.