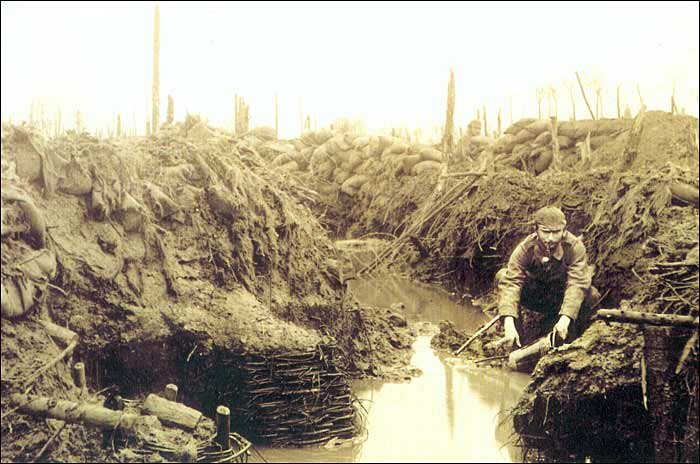 German soldier in a waterfilled trench in the vicinity of Ypres, Flanders (Belgium). This picture was made in November 1915. 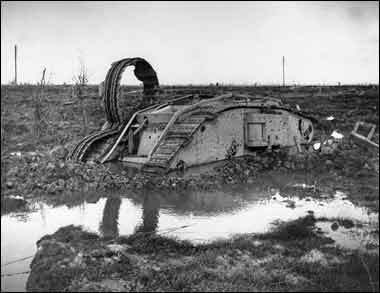 Rain was a dangerous enemy on the Western Front. Incessant rain caused whole campaigns to fail, like the Battle of Passchendaele in 1917. Tanks, the new British weapon on the battlefield, came to a stop because they simply sank away in the mud

Thousands of soldiers drowned in flooded shell holes. Heavy with material they slipped, fell into one of these treacherous pits and disappeared for ever. We have a remarkable picture of a French soldier rescued by German soldiers.

Innummerable soldiers suffered from trench feet, caused by standing for hours on end in waterlogged trenches without being able to remove wet socks or boots. The feet would gradually go numb and the skin would turn red or blue. If untreated, trench foot could turn gangrenous and result in amputation.

English veteran Harry Roberts: "If you have never had trench feet described to you, I will tell you. Your feet swell to two or three times their normal size and go completely dead. You could stick a bayonet into them and not feel a thing. If you are fortunate enough not to lose your feet and the swelling begins to go down...,. it is then that the intolerable, indescribable agony begins. I have heard men cry and even scream with the pain and many had to have their feet and legs amputated."