Canadian troops (left and in the background) advance, while German soldiers (foreground) surrender. 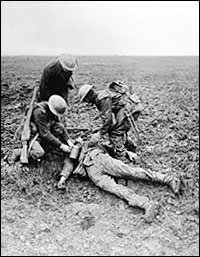 This picture of the Battle of Vimy Ridge, in Northern France, in April 1917, was made by Ivor Castle, Canadian army photographer. Castle has a reputation as maker of fake action photographs. This picture too is probably a montage (some researchers think that a part of the photograph was taken elsewhere during a training exercise).

Vimy did make a difference. After days of fighting, the Canadians controlled the entire ridge, at a cost of 3,598 men killed and 7,104 wounded - picture

Vimy Ridge was the first Allied victory in almost a year and a half. It was especially demoralizing for the Germans who had viewed the ridge as one of their most impregnable strongpoints.

To Canadians Vimy Ridge is historically meaningful. It was the first time in the nation's history that a corps-sized formation fought as a unit. This success of the Canadian forces earned Canada a place at the Versailles peace negotiations.