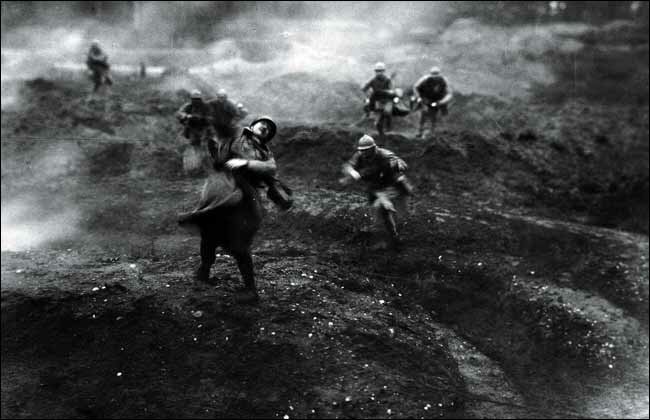 One of the most famous pictures of Verdun: a French soldier hit during an attack. But the picture is not true. It is a still, taken from a French movie made in 1927-1928.

Many WW1-books feature this photograph and mention that is was taken by a German photographer. In fact, this website did so too  we are indebted to Eric Gambert from France who showed us how wrong we were.

The movie, entitled Verdun, visions dHistoire, was made by Léon Poirier who, during the Great War, himself served in a French artillery division. To increase the authenticity of the reenactment, Poirier used French and German veterans to play the roles of the soldiers.

Many scenes were filmed on former battlefields near Verdun. In one scene a pacifist intellectual dies in a shell hole - a real one, as the moviemakers found here the remains of a human arm with a ID tag, on which they could just make out: "Fulle... 1916".

The dramatic picture above was extracted from a movie frame, and reproduced in an advertising booklet published by Jules Tallandier at the same time the movie came out.