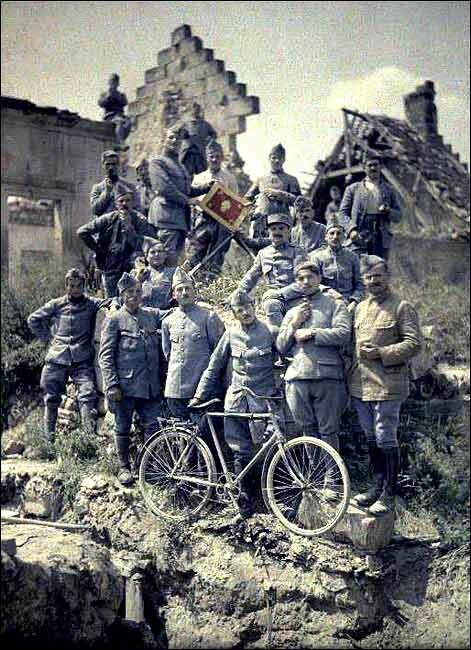 French soldiers posing for an official photographer of the French Army. One of the soldiers seems to be holding a sort of painting; did he rescue it from the house? And what about the bike? Maybe the soldier was just fond of it.

The offical caption that went with this picture reads: The non-commissioned officers of the 370th having been subjected to the attack of July 8th on the way of the Ladies (Village of Soissons, France, 1917).

The way of the Ladies of course is the Chemin des Dames, in the Aisne Department (Northern France), where in April 1917 the French launched a disastrous offensive against the Germans, advancing only 500 yards at the cost of more than 250,000 casulaties. The next months over half a million French soldiers mutinied, and refused to continue the failed offensive.

In June 1917 however, Germany launched a new series of attacks on the Aisne Front and the French soldiers found themselves fighting on the infamous Chemin des Dames once again. German attacks in that region continued all summer that year, also on July 8th, 1917, the date mentioned in the caption.