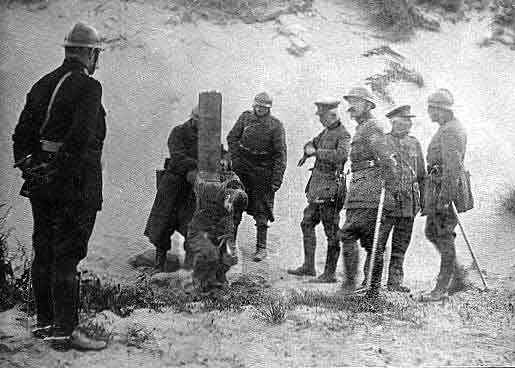 Belgian soldier and war-volunteer Aloïs Walput (21) is tied to a pole and shot by his fellow-men. This execution took place on 3rd June 1918 in the dunes near the Flemish village of Oostduinkerke.

The picture was made a few seconds after the soldier died: two soldiers cut the body loose, an officer (the medical doctor?) takes the exact time, the spurred commander of the firing-squad looks on.

After the war all armies made their files on their executions top-secret. In a few cases the truth leaked through. And sometimes one of the executioners wanted the story off his chest.

More on these executions in our article Shot at Dawn. The version in Dutch is titled Geblinddoekt en alleen.