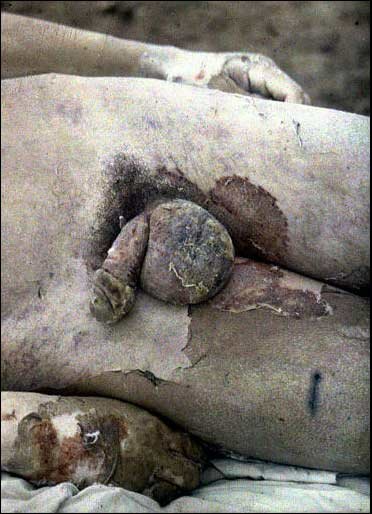 Very few pictures depict the real horror of poison gas. This French autochrome color photograph was made in 1918 and kept for medical purposes.

Musterd gas. The picture shows the serious lesions of burns of the genitals and thighs of a soldier of the French 22nd Infantry Regiment. On 18th March 1918 he got the full blast of a German gas attack. The musterd gas burned right through his clothes.

Both sides used poison gas. When the people at home would have known what gas really did to soldiers, they probably would have tried to stop the use of it — and maybe the war altogether. That's why pictures like these were never published or shown in public.

In 2005 it was exactly 90 years ago that the German army deployed toxic gas for the first time in history. This happened on 22nd April, 1915, near the Houthulst Forest in Flanders (Belgium).

Abomination. Nowadays the trees of Houthulst conceal the largest stockpile of poison gas in the world: numerous shells from the Great War filled with deadly mustard-, chlorine- and phosphate gas. Sufficient for the eradication of millions of people and hardly guarded. Read about the Abomination of Houthulst. With pictures by Piet den Blanken.

Even more shells containing musterd gas and other toxic gasses lie on the bottom of the Northsea, just off the beach of the Belgian holiday resort Knokke. Read Death Waits Patiently on a Flemish Beach, and shiver.